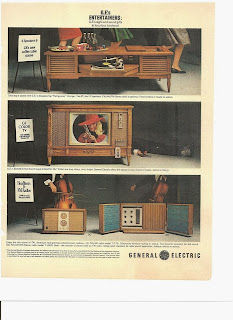 See the radio on the bottom right?  That was in the den on a bookshelf of encyclopedias, next to a desk that had the typewriter (Courier 10 type font) in a room that had the swamp cooler blowing out.  This one was stereophonic and had FM.  A jazz station usually came out of that, sometimes KPFK.

Other noises.  Snippets of conversation, from those earlier more innocent days of FM radio when broadcast frequencies were not so rigorously modulated. At times, inexplicably though probably dependent on some natural phenomenon like cloud formation, a scratchy-sounding two-way radio conversation would be picked up by my mother’s radio. The unshielded transmission suddenly would bleed through the round grill cloth of the table model, sometimes interrupting the music, sometimes blending around it. Always a bit startling, local cops in conversation not knowing they were being listened to by any but each other.

They would drive past on Arrow Highway talking to another cop somewhere on a radio.  Sometimes they would park along our house on Arrow Highway and "hide" awaiting all those who speeding downhill on Mills would always run the stop sign at the corner Mills and Arrow because there was no reason to stop ... no cars, no pedestrians, no reason to stop except for the stop sign.  Frank heard this "cop talk" on our radio more than once and laughed like we did.  We'd run to the radio and try to hear what they were saying, or go out to the backyard and peek through the grapestake fencing to see if there was a black and white patrol car parked outside on Arrow.

Want to know what the bleed through sounded like?  Listen to "Giddyup" by Corey Harris (on Downhome Sophisticate).

Other times, the AM radio in my bedroom, when I was listening very quietly to music late at night in the winter, would have intermittent bursts and pulses of static noise.  I'd noticed that the heat would come out the vent in the room at the same time as the bursts.  This sound would drive my sister crazy.  But I assumed this was connected in some way with the electrical pulse of the thermostat on the heater, go turn down the wall thermostat in the hall, and this noise would eventually stop.  That seemed to fix it.

When we first moved to Claremont there was one traffic light and two policemen in town.  They worked in shifts:  One for the day and one for the night.  And there was one patrol car.  Soon after, 1959, they started building the numbers on the local force in response to two new subdivisions on the south end of town, what the townspeople called "crackerboxes" (no blacks in there yet).  And the one big fancy housing tract Claraboya to the north of Foothill.  With the coming of the freeway in 1957, more people started moving in and around Claremont.

My sister without asking me loaned my book "Black Boy" (by Richard Wright) to either Frank or Don.  I never got it back, though I inquired about it, and she was unapologetic, listless, and didn't give a damn.  She didn't respect boundaries.  I learned the word "Bildungsroman" and not from wikipaedia.  I kept reading on and on, and so did they off and on, and soon we made jokes about "Thomas, Mann" and that was before I'd even set eyes on the Notesbooks of Malte Laurids Rigge, which a conga player who came from a rich family and so had attended a rich Eastern school despite his shoulder length hair and sandals (and this was 1964 before such things were faddish) had given to me as a farewell present.  That was a kindly gift on his part, and one much appreciated, as aside from a copy of zenfrogpoems and "The Prophet" (bestowed by a friend trying to balance out my existential readings), no one had given me a book at a critical juncture.  Frank would read my copy of D.T. Suzuki ($1.45) and Alan Watts who hoped to explain him.

In 1966, when I spoke with Frank on the telephone when I was in Laguna Beach and "Freak Out!" was offered on the KPFK fund raising telethon, he had no response when I told him that Alan Watts and Jano had just stayed over (and Alan had vodka in his orange juice for breakfast).  And he had nothing to say about my trying to help build a harpsichord that summer, either.  I hope KPFK didn't broadcast live all that stuff I said to Frank on the phone that day.  I was headed to Berkeley at the end of that summer to begin regular studies there.  In Laguna Beach, it was hard to find work, everyone wanted a job at the beach.  I got a job as a dog sitter and two days as a baby sitter for the grand daughter of a rich old bat who was ashamed her daughter had met, married, and bred with an East Indian.  My adventures in Laguna Beach that summer were myriad, colorful, and multifold, and my last gasp at being a teenager before moving on in my university "career".